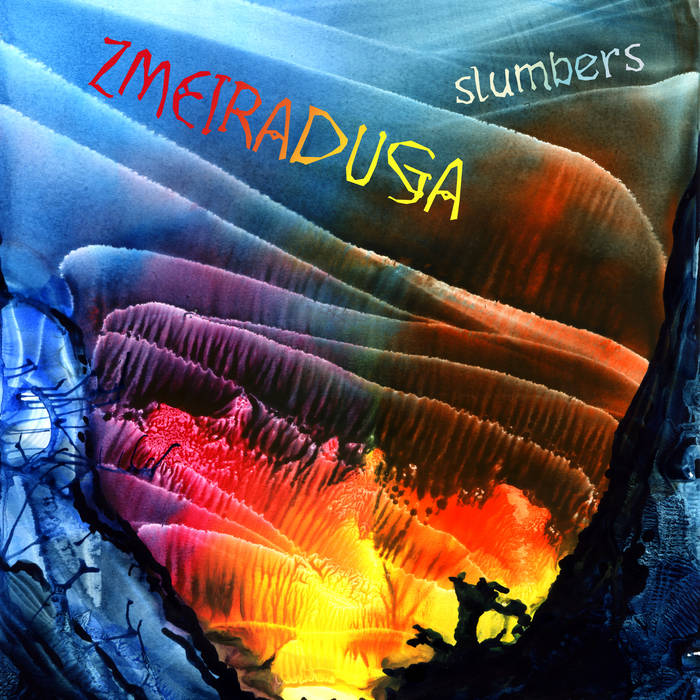 The members of the aboriginal band ZMEIRADUGA (ЗМЕИРАДУГА) seek inspiration in ancient caves, the thicket of wild-growing jazz, Australian anthills and yurts of shamans. The masters weave the warmth of voices and sounds from the whole World into the energetic canvas of percussion. The pipes of Australian Aborigines, sounds of nature, polyphony of ethnic drums and songs in forgotten languages – all of these are played live at the crossroads of ethnic, tribal ambient и psy-dub.

The music of ZMEIRADUGA continuously flows from one form into another during performance – no two performances are alike. It is enthralling audio performance shrouded in a primeval mystery of emotions of modern aborigines of the Central Russian Upland and their comprehension of all that is happening around them. It is narrated once only right here and right now in an enchanted state that is referred to as “slumber”. Often in the process of performance some of the musicians of ZMEIRADUGA lapse into this remarkable state, and then the narrative can dramatically change or indeed transform into a dance.

“The slumber dance” perfectly supplements visualisation of concerts. Painters, makers of musical instruments and of other useful objects, including kitchen utensils, occasionally join in. It is in keeping with a tradition of the ZMEIRADUGA tribe to accompany an action or an event with musical illustration.

That said, anything around us could serve the purpose of sound extraction, be it a container, a piece of metal, an electronic spare part as well as fully functional synthesisers or drums. The musical style of ZMEIRADUGA is sometimes given quaint definitions such as "chip-tribal" or "ethno dream & dance" perhaps due to the fact that, besides percussion and other above-mentioned instruments gathered worldwide, ZMEIRADUGA frequently use various sound generators and transducers.
The fact of the matter is that ZMEIRADUGA make use of many instruments that are handcrafted by the musicians themselves or by their friends. Besides, a member of ZMEIRADUGA Elena Kozyryatskaya has created the paintings that you view when you play the tracks of the album. The other members also paint but they decided that Elena’s watercolours suit the tracks of the album best.

ZMEIRADUGA is naturally much loved by tea ethno-clubs. That is because tea of all kinds is the best substance for the aborigines of the Central Russian Uplands. It allows the musicians to prolong the state of creative slumber. That is why a performance is very often accompanied by open fire tea brewing. The gift of tea is the best compliment to the musicians’ performance. At times right in the middle of a performance tiny parcels of (on occasion rare and expensive) tea fly straight at the musicians. Or quite simply all brew tea over fire together and pass cups around while playing the instruments. Such performances, during or after which tens or hundreds of people treat each other to tea, are commonplace within the ZMEIRADUGA tribe. Touring is not a problem – just don’t forget to brew tea.

Tours very often coincide with special missions within the Central Russian Uplands as well as beyond them. Every so often someone from the tribe becomes a so-called “walker”. This way a multitude of ZMEIRADUGA tribesmen have spread throughout the world, congregating particularly around so-called tectonic faults. At the right moment they lapse into the exceptional state of slumber. In this state ZMEIRADUGA aborigines reach the particular concord in which, according to their conviction, every creature on the face of the Earth acquires peace and harmony as well as a “ticket” to the next “stop”.

The whole of 2011 ZMEIRADUGA were slumbering in order to thwart yet another apocalyptic emergence of Green Ants to the surface. After this a post-script was published on a modern carrier. To this day humanity mistakenly takes this post-script to be the album entitled “Green Ants”.
In 2012 ZMEIRADUGA carried out slumber séances with their colleagues and fellow tribesmen on the continent of Australia. This was due to the fact that only one local species of dogs, viz. Dingo, was able to slumber in the particular way in which their paws made moves that the local Aborigines referred to as “ants’ dance”. Decoding of this dance provides a clear vision of the state of the affairs with those Green Ants. Having checked that nothing threatens the human race within the next ten years, ZMEIRADUGA issued an album entitled “Dreams of Dancing Dingo”. Sales staff at music shops mistakenly put this album in the “Lullabies of the World” category.

In order to dot every i and cross every t, ZMEIRADUGA widely travelled the first half of 2013 to find themselves. Upon returning they found that one of them, who had stayed behind, serendipitously recorded music of ZMEIRADUGA, which was broadcast by a remote radio station. The music was laden with enigmatic noise and interference. Once it was realised that after a playback a cat, whom ZMEIRADUGA were acquainted with, ceased to exhibit symptoms of allergy provoked by human beings, it was collectively decided to publish the “ReLive” album.

What you see and hear under the title ZMEIRADUGA – “Slumbers” ("Dryomy") is the fulfillment of a promise given to a tea master to record music in the state of slumber so that his hands would not tremble too much when the music is played back during the tea ceremony.
We have added pictures in order to amplify the impact, so that there would be something to look at as well!

Members of the aboriginal band ZMEIRADUGA seek inspiration in ancient caves, the thicket of wild-growing jazz, Australian anthills and yurts of shamans. Voices and sounds from the whole World, ethnic drums, pipes of Australian Aborigines, alien synths, sounds of nature and songs in forgotten languages – all of these are played live at the crossroads of ethnic, tribal ambient и psy-dub. ... more

Bandcamp Daily  your guide to the world of Bandcamp

outré black metal, with a Victory Over the Sun interview and music from Liturgy and Jute Gyte.